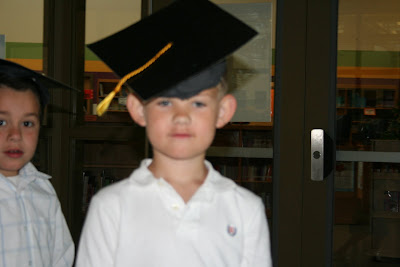 Jack has successfully completed Kindergarten. Grandma and Grandpa Kramer came out to the big graduation ceremony complete with square caps and fancy diplomas. Afterward we all went out to eat and Jack was showered with congratulations and gifts. Like his daddy, Jack loves formality. He loved the procession and the hat and he took it all very seriously. He insisted on wearing his cap at a really sharp forward angle and walked really stiffly. It was all very military. He loves structure. He likes to know exactly what the chain of command is and he loves uniforms and things like saluting. He measures other kids by their obedience and he does not like rule-breakers. He is so much like John in so many ways. 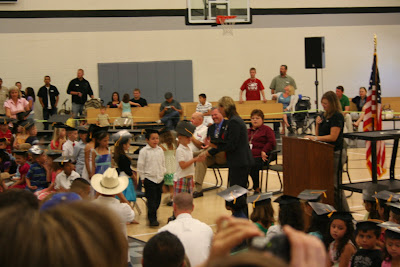 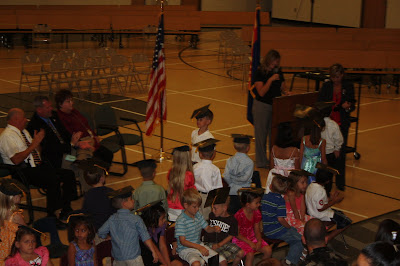 He has been done with the school year for less than a day and he is already asking when school starts again because he is bored. Its gonna be a long summer.
Posted by Staci Kramer at 7:36 PM 3 comments:

We have five tortoises. For the most part we love having them. They just eat the grass and they are totally fine with being messed with by small children. They are as friendly as reptiles are capable of being. The biggest one weighs about 40 pounds, is a foot and a half in diameter and his name is El Guappo. The only problem with El Guappo is that he is, how shall I put this... lonely. I have been tempted to post an ad on craigslist to search for an attractive single female tortoise. I am not looking to own another tortoise, maybe just to arrange dates. I'm sure there is some nice female out there who would love to be swept off her shell.

In the mean time, El Guappo has put all of his romantic energy into a relationship with our soccer ball. What he does to that ball is obscene. There is something about the octagon pattern and the contrasting black and white that turns him on. If given access, he spends hours upon hours mounting it. The worst part is the grunting noise and the thick layer of slime. We recently hosted a big party at out house with about sixty guests. I heard a commotion in the back yard and discovered that the tortoise had gotten to the soccer ball and was hooking up right in front of everyone. The kids were in an uproar and were all asking what he was doing. The adults were all shocked and either disgusted or entertained or both. Nobody knew what to do about it or how to explain it to the children. A few people laughed and snapped pictures. I had to go out there and push him off of it and hide the ball. It was pretty much the highlight of the afternoon. 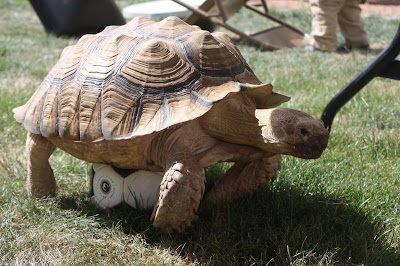 So if you know anyone with a girl sulcata, send them my way. He is handsome, virile and obviously not too picky.
Posted by Staci Kramer at 5:56 PM 4 comments:

I make it a point not to embed random things in the family blog unless I LOVE them. ASnd this fits the bill. Take a minute and watch this commercial. This is a genius ad campaign. enjoy... 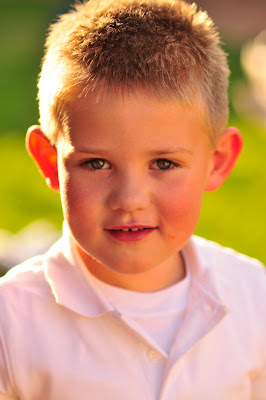 Let me take a moment to do a little bragging about Jack. He is a genius artist. It is always amazing to see what interests and personality traits emerge in children as they grow. Jack has always loved drawing but what really gets me is his accuracy and his ability to draw things from different angles. Once when he was four I asked him to draw the room we were sitting in. When he was done it was just a strange smattering of rectangles. Then I realized that he had drawn an aerial view of the room and all of its furniture. The fact that his little brain could translate it onto paper was incredible but that he was drawing from a perspective that he hadn't actually seen blew my mind. He is in Kindergarden and at an age when a lot of kids his age are still drawing people with legs coming right out of their heads. Jacks drawing are not only accurate, they are super detailed. Here is a sample of one of his recent doodles: 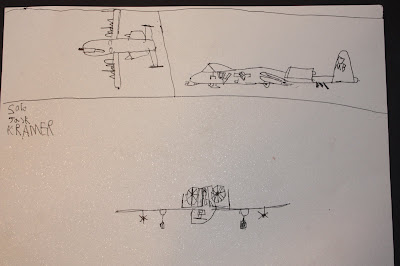 These are three different views of a plane. Check out the detail! This is straight out of his little brain. You will notice on the left he doesn't always get which direction the numbers and letters are supposed to go (it says 2010 Jack Kramer) but he has the side view of the airplane wing right on and how about that Air Force logo!? I don't know if he'll end up as an aircraft engineer or a sketch artist, but I know that he's got my drawing skills beat at 6 years old.
Posted by Staci Kramer at 2:19 PM 2 comments: