I spent the morning reading Love and Logic for Early Childhood. Its the best parenting book out there and I find myself re-reading it regularly to avoid strangling my children. Jack is lucky that I was in the Love and Logic frame of mind when I found this: 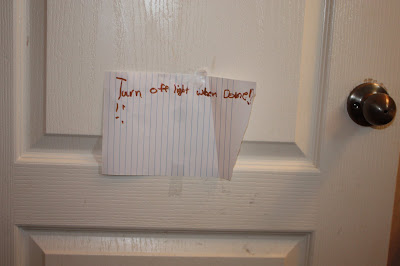 There was this strange note posted on the door reminding any bathroom users to turn off the lights when they are done. I knew immediately that this sign was more than a five year old's attempt to encourage energy conservation in the household. Upon closer inspection I found this: 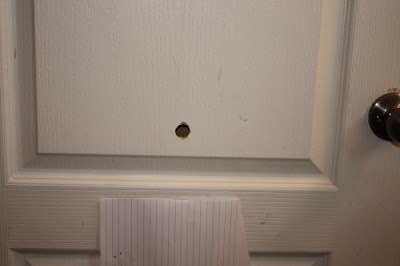 He accidentally punched a hole in the bathroom door with a big stick. This particular stick has been recently outlawed and I specifically told him the reason for banning the stick was that something will be damaged.

There are a number of things I could say about this cover up attempt. Its an interesting insight into his little brain. I think he was hoping that I would just leave the sign on the door forever and never see the hole. Also I would like to point out the use of exclamation marks that continue on the second line. It would have been really hilarious except that the door is destroyed.

My first instinct was to beat him senseless with the above mentioned stick.

Instead I had the following conversation:

"Wow, this is a very sad situation. It looks like you made a choice that ended up ruining my door. What is your plan to make this all better, Jack?

I would fix it if I were the one who did it but I'm not. In fact, this is the very reason I don't swing sticks around in the house. Because I don't know how to fix holes in things. This door has to be replaced and so you'll need to get the money to me as soon as possible."

"Maybe you can sell some of your toys or earn money doing extra house work. I'm sure you'll come up with something. You're a smart kid"

"Great. Now I have to write another letter to Santa asking for toys and money."

So I put a new bathroom door on the list of Christmas expenses. And for the sake of everyone I have removed the big stick from the premises permanently. On the bright side of things, maybe he will be more likely to turn off the bathroom light when he's done now.
Posted by Staci Kramer at 11:07 AM 14 comments:

Jack is five. He is at a really fun age for the magic of Christmas. He believes in Santa wholeheartedly, but he is also a really smart kid who thinks everything through. Lately he has come up with a few practical questions about how this whole thing works and I have a feeling that his days of believing in Santa Clause are numbered.

This morning I sent him to school with a new unwrapped present to donate to the toy drive that the school is hosting. It was a really cool motorcycle that makes noise and runs when you push a button. He wanted it and totally refused to give it up. He threw a big fit about wanting to keep it. I was ticked. I explained to him that it was never his to begin with, that it wasn't purchased with his money and that he already has plenty of toys and will be getting even more at Christmas. I explained that this toy would provide Christmas for some child who would otherwise get nothing. We have so much and so many people have so little. There are families in our own community who don't even have enough to eat, let alone toy motorcycles.

He looked at me and scoffed "Why don't they just get what they need from Santa Clause?" his wheels were turning. "And why do you always tell me stuff I want for Christmas is too expensive if you're not buying it anyway?"

"Uuuuuhhh..... Well Jack, Thats a good question..." I was totally stumped. I want to answer his questions honestly and I want him to have an appreciation for the things he has and the money spent on him, but I don't want to squash the magic of Santa for him at five years old. He wanted to know what a parent's income has to do with anything if we all get all of our presents from Santa anyway. He wouldn't let me change the subject. He was thinking hard about it and he wanted answers.

I told him that yes Santa brings the stuff and yes he makes a naughty list and a nice list and stuff but theres no way in the world that one guy could afford to buy all of those toys for everyone so we pay him money for the toys he brings. By donating the toys, we are helping Santa bring toys to the kids whose parents can't pay anything. Jack countered that Santa makes the toys in his workshop with his elves. I explained that he has to pay the elves and it costs money to run the North Pole so he needs the parents to pay and some parents just cant afford it.

The whole answer was awkward and unsettling. Jack could sense that something is messed up with the whole program. I wish I had had more time to think about it but even then I don't know what is the best way to explain this without ruining it. John was listening in to the whole conversation and he was horrified. He says I "used the nuclear option" but he didn't have any better ideas either. In my defense, I didn't tell Jack there is no Santa, I just turned him into a capatalist. He's jolly and generous and magical but he doesn't show up unless his invoice is paid in full.

So toy drives are a great thing but I'm starting to realize that maybe we should leave the kids out of it. I think I will try to find other ways of fostering holiday generosity because Jack is too smart for his own good sometimes. This is one of those parenting challenges that I probably screwed up on and I will know better with the next one. The oldest child in every family is the guinea pig in a lot of ways. Sorry Wack, if it makes you feel any better, we will screw up less on your siblings. 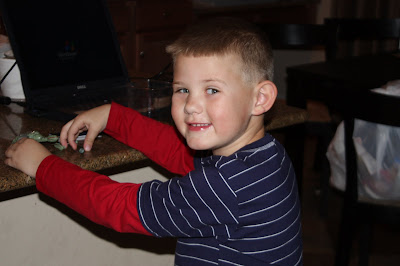 Last night at about 2 am I heard a blood curdling scream coming from Jack's room. As a mom you get to where you know all of your kid's screams and what they mean. This one I had never heard before because it was so full of pure terror. I went running into his room honestly expecting to find a masked gunman kidnapping him. As I ran down the hall the thought crossed my mind that I should have grabbed one of John's guns.... that's how bad the screaming was. When I got in there he was standing on the bed. I grabbed him to see if he was hurt or sick, "What is wrong!?!?"

His screaming answer: (and this is an exact quote) "I want candy and presents!"

Candy and Presents? Apparently he had a nightmare that Christmas had come and he didn't get any candy or presents. My first thought was that perhaps I have been threatening the naughty list a little too much. My next thought was that if this is the worst nightmare the kid can come up with, his life is pretty good.

He then laid down and went to sleep. Actually I don't think he ever was awake. He doesn't remember any of it this morning.

Jack doesn't need to worry about Christmas. Santa is bringing an X-box much to my dismay. I'm a little worried that video games will become just one more thing to police around here but I have heard that the built in parental controls and timers are awesome. Now I just have to set it up so that I have the password and no one else does (including Santa and Santa's co-conspiritor John).

My christmas present this year is that one of my dearest friends, Diane Vernizeau is coming to spend a week with us for Christmas. She was a person I taught on my mission and she is the most intelligent, beautiful, spiritual, kind person I know. We haven't seen each other for years, but she is in the states doing post docterate work in international law at UC Berkley, and we get to have her here for the Holiday. I am so happy about her visit I can barely contain myself.
Posted by Staci Kramer at 11:11 AM 2 comments: