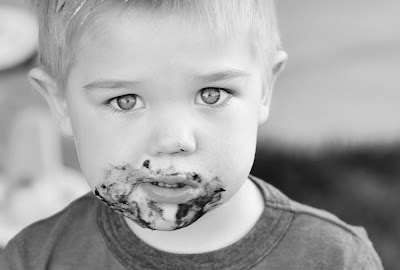 Abraham is two and he is in a tough spot as far as communicating with the world. He is just on the verge of speaking English but still relies mostly on a system of hand gestures, English inspired noises, and emotional displays. I spend the most time with him and therefore understand most of what he is trying to say. We have been working on sign language too and he loves that. I think he is right on the cusp of a huge language explosion and for the sake of everyone's sanity I can't wait till he can just say exactly what he wants to say whenever he wants to say it (I need a volunteer to read this blog entry back to me when he is a sassy four year old and I want him to shut up)

What has struck me as I have watched Abe's vocabulary blossom is how many words there are that have multiple uses. I already blogged about the utility of "nudder un" (another one) but there are a whole list of words like this.

At the moment he uses the word "pop" in almost every sentence. First of all, his Grandpas are both Pop-pop. Plus he has the Otter pop addiction so he's always pointing to the freezer and saying "pop". If he is pointing to the pantry and demanding "pop" then he wants either a Pop-Tart or pop corn. Also on his list of favorites are pop-sicles, lolly-pops and soda pop. All of which he asks for by looking me in the eye and earnestly saying "POP".

I give him balloons if he uses the toilet. He begs for another balloon and when I tell him I just gave him one two minutes ago and ask where that one is he puts his hands up in exasperation and says "pop." His favorite song is "Popcorn Popping" and he loves singing "Pop Goes the Weasel".

There are other dualities going on. If he says "Go-go" I'm not sure if he is asking to go for a trip or requesting an episode of Go Diego. When he says "Ba Ba" Is he asking for a bottle or asking for Bob Bob (Spongebob Squarepants)? The list goes on and on

This kid is so much fun and so much work! The terrible twos are well underway and I want him to grow up, but I already miss my baby.
Posted by Staci Kramer at 9:34 AM 4 comments: 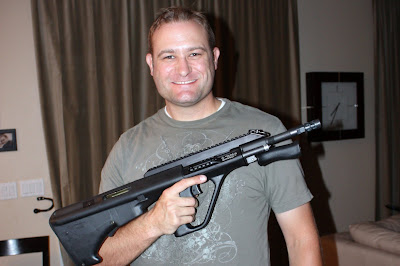 There is one gun that John has fantasized about since before I have known him. Its a Steyr AUG. He bought an off brand model last year but that just didn't totally do it for him. This week he got a real brand new Steyr AUG. Check out the smile on his face. Its true love. 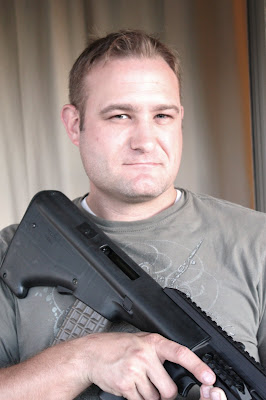 Summer is here and these kids are officially bored and cooped up. I have been busily making plans and playdates to fill the hot days. We went to Peter Piper Pizza this week, made freezer jam at the Sly's, went swimming at Grandma's house, played one million hours of X box and learned to ride a bike without training wheels. Abraham has developed an unhealthy obsession of Otter Pops that I only realized was truly out of control when I saw that his poop has become otter pop colored. Sir Isaac Lime and Louis Blue Raspberry seem to go through his system totally undigested. Also those empty Otter Pop wrappers are EVERYWHERE. At first it seems cool that they sell them in packs of 100, but now I wonder what they were thinking. My carpet will never be quite the same. Also, I have a bone to pick with the geniuses that put the following on the otterpop box: "100% Fruit Juice!" and then underneath in small print it says "From Concentrate With Added Ingredients" I'm no mathmetician but if there are added ingredients then the percentage of fruit juice is obviously less than 100. So it is 100 percent juice except for all of those other things, which if you read the ingredient list, totals two percent. I think they get away with this because no one cares about otter pop regulation enough to sue them, but I personally find it offensive. Do they really think we are dumb enough to believe this lie? I don't know why I get so fired up about a contradictory statement on my box of frozen juice bars, but I think there should be a class action law suit or something.
We had a little girl named Alexis over for a playdate this week. She was in Jack's kindergarten class this year and we ran into her and her family at Paradise bakery so we exchanged phone numbers. Shortly after this exchange Jack got a little bit obsessed with the idea of having Alexis over. It became obvious that he has a little crush on her. He kept telling me about how she's the nicest girl in school and she's the smartest and she never gets in trouble ever. This is high praise from Jack. He has good taste too. She is adorable with long blonde hair and an impeccable wardrobe. When she came over she carried a little silk purse and had a voice like she had been sucking helium. SOOO feminine. Jack counted the days until she came. Before she arrived he made some preparations. He got out stuff to draw and color with and pulled out the Spongebob Operation boardgame. When she was finally here they had the most hilarious conversation.
Jack: I got lots of stuff we can do. You get to pick whatever you want.
Alexis: I don't know.
Jack: I usually play with boys and boys like playing army but you're a girl so I put away all of the army stuff. We can do whatever you want.
Alexis: Uhh... I don't know.
Jack:We can do whatever girl stuff you want. Like you can put on makeup and paint your nails, or you can watch girly TV shows or you can play dolls. Its totally up to you.
Alexis: Well, I like to play on the monkey bars and swingset.
Jack: Okay, lets go out back and you can pretend to be a princess while you swing.
I think he was a little surprised to find that girly girls can hold their own on a jungle gym. It was very good to see him on his best behavior for a girl.
Jack has been playing a lot with Isaac Sly. His mom Kara is one of my best friends so its super convenient that Isaac and Jack get along so well. Isaac is a really nice kid and I don't ever have to worry that he will teach Jack bad things or get into trouble when they are together. Those two can play for days and days on end and never get bored or irritated. They also had a funny conversation yesterday.
Isaac: What does your dad do for a living?
Jack: He's a police officer
Isaac: Cool! He gets to shoot people!
Jack: Well, not really. Mostly he makes phone calls and writes reports and stuff.
Isaac: So he's like, "Stop, badguy! or I'll..... call you? Stop, or I'll use my ....pen?"
Thats pretty quick sarcastic wit for a first grader. I like him.
I already can't wait for summer to be over with. I wish we had a pool or something so that there was anything to do outside. For now we are just hunkering down in the air conditioned house and waiting for fall.John has summer especially bad. Directing traffic for eight hours in direct sunlight when its over 105 degrees while wearing head to toe black and twenty pounds of gear and a bullet proof vest is not my idea of a good time.
Posted by Staci Kramer at 12:43 PM 1 comment: 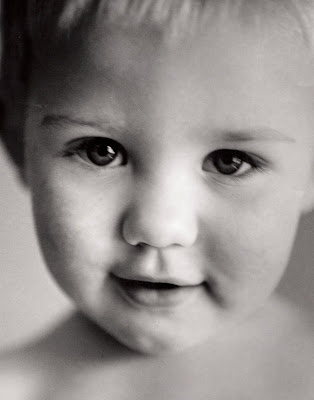 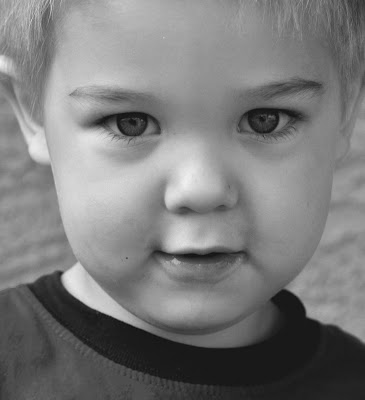 I was going through some pictures of the boys today and I came across these two shots of Jack and Abe at two years old. I know they look alike but to see pictures taken at the same age is absolutely mind boggling. I basically gave birth to identical twins four years apart.
Posted by Staci Kramer at 5:25 PM 9 comments: