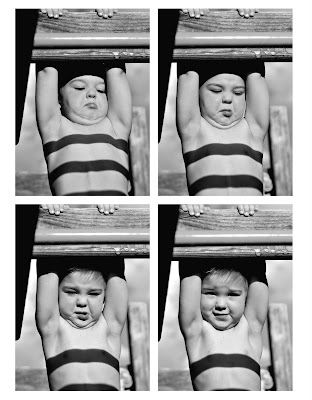 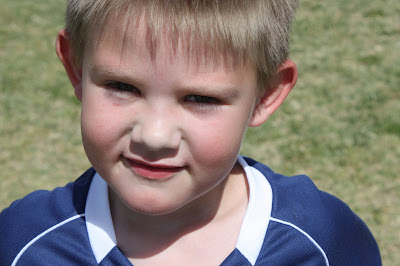 you would think my motherhood/ adult status was pretty established, but in reality it only became official this week when I became (drumroll please).... A SOCCER MOM

Yes, Jack started soccer and yesterday had his first game. I have never been so captivated by a sporting event in my life. It was so fun. keeping Ham off the field was an athletic event in and of itself. 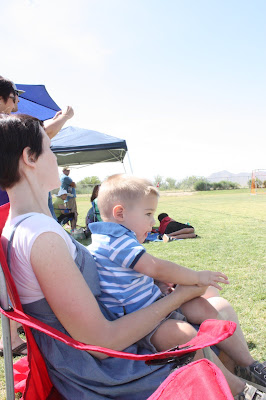 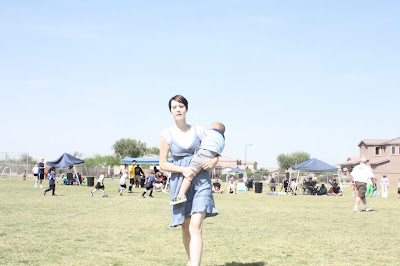 So for his first game he did really well. At this age the kids tend to chase the ball around in a pack. They are all dying to get a touch on the ball but then they kind of panic when it happens. Our good friend Chris coaches Jack's team and he is great. He keeps the kids motivated and keeps it positive but still takes it seriously enough that the kids want to do their best. I love that Jack is getting the exercise and sportsmanship etc. He gets out there and tries hard and hussles and I love it.

As for his natural athletic skill, he takes after his mom who's youth soccer career is to this day highlighted by an unfortunate flower picking incident that occured while I was assigned to the position of goalie. Turns out Flower Arranging and chatting with defenders came far more naturally to young Staci.

For a minute I thought that there was a chance Jack would take after his dad in sports. Look at the following series of photos to see what could have been Jack's moment of Soccer Glory 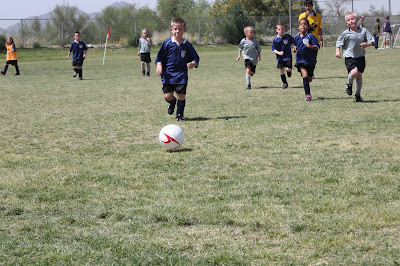 He has a clear shot at the ball. Number 10 is all over it! 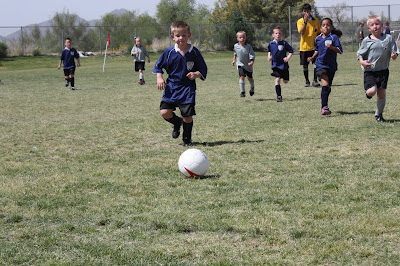 He's keeping his eye on the ball! He is hustling! Go Jack! 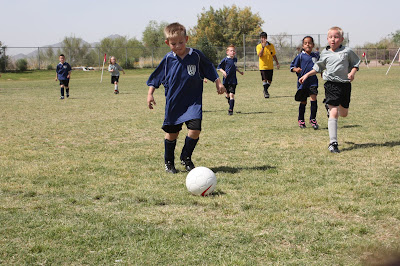 He gets to that ball and sets up for his fireball kick! 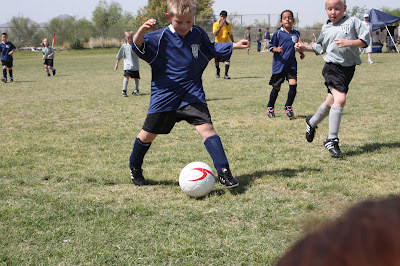 Okay, so he overshot the approach by just a tiny bit. That pesky ball sneaked between his legs. 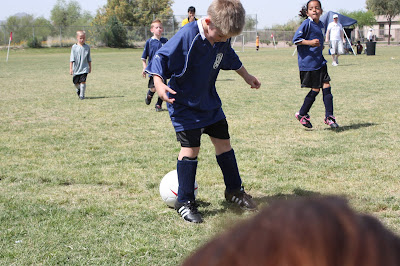 This shot is priceless. I have a hard time looking at the series without chuckling. His body language shows how shocked he is that the ball somehow ended up behind him. After this he backed up and had an awesome pass. Considering that it was his first game and he is both the youngest and the biggest on the team, He was a superstar. Our team (The Sharks) won the game 5 to 0. There were high fives and Capri-Suns all around afterward.

Abraham is chomping at the bit to get into soccer. Most days he insists on wearing Jack's shin guards around the house and wants to take the soccer ball into bed with him. 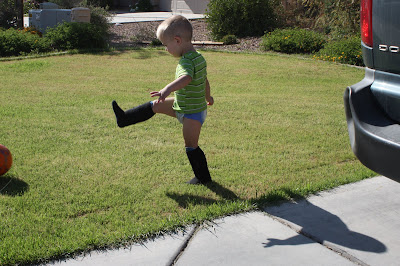 Who needs something as frivolous as pants when you have access to these sweet shin guards? Its business time.
Posted by Staci Kramer at 9:28 AM 5 comments:

Easter was wonderful. the boys were showered with toys and candy from the Easter Bunny and then showered again with toys and candy from Grandma. As is par for the course with these two, they had very different reactions to their candy windfalls.
Abe of course wanted to eat all of his candy immediately. It has been three days now and he hasn't gone more than a few hours without some "nanee". He has also recently learned his first complete sentence and he says it over and over over. "I want another one." pronounced like "on nudder un." He likes to identify everything in his world as a "nudder un" even if the first one hasn't been identified. Actually, You'd be surprised how often in makes sense to say "nudder un". At the zoo, every animal is a nudder un. Every show on TV is a nudder un all of his toys are a nudder un. Kisses, flowers, dogs, cars, bugs... Everything is a nudder un. Its a genius phrase because it serves as an identification and a request for more. I swear the kid was born knowing how to work it. After he discovered his Easter basket on Sunday morning he dug through the thing taking inventory excitedly shouting "Nudder un! Nudder un! Then after he had gone through the whole thing he looked around the house hoping to find more easter baskets, asking everyone "Nudder un??" and then told everyone he wanted "a Nudder un."
Jack for some reason wanted to sell his Easter candy. Explain that one to me. The first day I thought it was a novel idea and laughed but two days later he hadn't eaten any of it and was still begging for permission to sell it. He didn't have a buyer, he wanted to go door-to-door and offer it to the neighbors. He priced everything out and displayed it in his basket and plotted his sales route. All he needed was my permission and that took a few days to secure, but he perservered. Finally I let him go because I was impressed with his determination, I'm always in favor of fostering capitalism, and I was sick of hearing him beg. I adjusted some of his inflated prices because I didn't want him to use his cuteness to rip any one off and sent him out. He had an impressive close ratio. He went to six houses and made three sales. I thought he would give up after his first no but he really didn't care, he just moved on. After hitting the block I made him come in. He made three dollars and he felt like Donald Trump. He acted like Mr. Krabs. Counting his money, looking at his money, caressing his money. He was so proud of it.
Later that night we were reading scriptures as a family and we read in the first chapter of Alma about how the righteous people were blessed with prosperity and they used their money to feed the hungry and help the needy and were therefore blessed with even more.
Alma 1 30-31:
30 And thus, in their aprosperous circumstances, they did not send away any who werebnaked, or that were hungry, or that were athirst, or that were sick, or that had not been nourished; and they did not set their hearts upon criches; therefore they were dliberal to all, both old and young, both bond and free, both male and female, whether out of the church or in the church, having no erespect to persons as to those who stood in need.
31 And thus they did aprosper and become far more wealthy than those who did not belong to their church.
Then Jack did the most touching thing I have ever seen in my life. He ran upstairs, got out his three dollars and gave it to us to give to the poor. It was totally his idea and was totally unprompted other than the passage of scripture read from the Book of Mormon. John and I totally melted. There is no feeling in the world like seeing your child really learn to be a Christian. His three dollars might as well have been a million dollars. He gave everything he had, just like Jesus did two thousand years ago. Happy Easter, Jack Jack. I love these kids. They make me count my blessings every day. A nudder un, nudder un nudder un..... see, it fits everywhere!
Posted by Staci Kramer at 2:00 PM 5 comments: